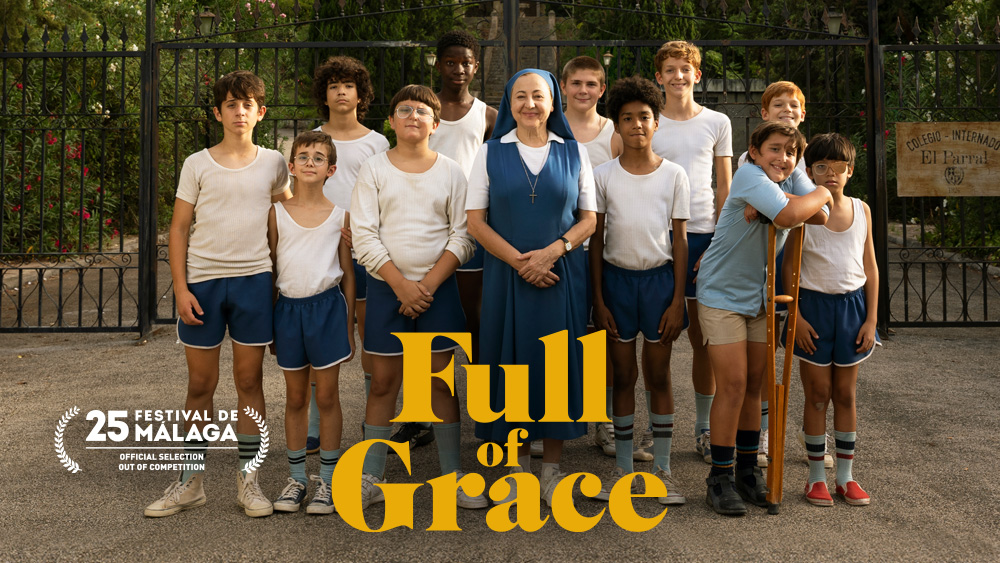 Full Of Grace winds up this year’s Málaga Film Festival by ticking all the F-boxes – it’s family-friendly, fun feel-good fare, and it’s about football. Calibrated to keep its audience poised between laughter and tears, Roberto Bueso’s story of a nun’s transformative impact on the lives of a group of orphans at a run-down Spanish boarding school is the very definition of good, old-fashioned fun, with Carmen Machi’s central performance as Sister Marina a joy to behold.

With its gentle moralising about the old-school values of teamwork and respect, Full Of Grace is exactly the kind of film that modern parents will want their children to see. And since it’s set in 1994, there’s not a toxic smartphone in sight. It remains to be seen, however, whether its innocent charm will be so appealing to their savvy offspring. Success at home comes built-in, with some offshore business also likely.

Grace picks up elements of two recent Spanish box office successes: Javier Fesser’s Champions (which also shows how to build a successful team from unpromising individuals) and the Javis’ Holy Camp (for its cool nuns: in Spain, nuns still represent a bigger box-office draw than they do in most offshore territories).

Sister Marina (Machi, a superb actor whose popularity in Spain is fully deserved) turns up at the El Parral boarding school at the start of summer to look after its orphaned residents who have nowhere else to go. ‘Lions in a zoo’, is what Sister Marina calls her young charges: they steal from neighbourhood shops, fight with the local kids and make nearby parents angry. What they need is to be part of a football team: so Sister Marina, despite opposition from Mother Superior (Nuria González), builds one. And it’s all going pretty well until the local parish priest (Manolo Soto) shows up, threatening to turn El Parral into a private school.

Despite some plot absurdities, the script is careful to keep things emotionally true, and there’s a real depth to some of Sister Marina’s exchanges with the boys. It would be stretch to say that the character work in Full Of Grace is subtle, but Sister Marina is interestingly and appropriately presented as a bit of a rebel herself; she comes with a lightly drawn, interesting past that makes her able to identify with her charges’ emotional hardships whilst finding an emotional home for herself.

The script, co-written by Bueso and Óscar Díaz Cruz, also does a good job of individualising the boys. They are a winsome enough bunch covering a range of types, but tubby, bespectacled, sex-mad Sebas (Adrian López); stands out for his cut-the-crap attitude. The story is loosely based on that of Valdo Lopes (played here by Dairon Tallon), a footballer who attended the real-life El Parral Valdo.

Soto as the parish priest is comic gold, delivering a couple of the several laugh-aloud moments that Grace provides. Paula Usera as Sister Angelines is a solid comic foil to Sister Marina. But the school’s janitor Rafa (Pablo Chiapella), called ‘Failurino’ by the kids, living in the past and trying to stay happy following his divorce, comes over as a little too pathetic to be comic. He feels at odds with his surroundings.

The film is set during the 1994 World Cup and, though it conveniently forgets that Spain was knocked out in the quarter-finals that year, it is full of details that will appeal to the now-parents who were youngsters at the time. Spanish males of a certain age will remember, for example, back in the 90s when Canal + showed porn late at night, trying to make out what action was taking place in the scrambled images that non-subscribers had to contend with. It’s such little true-to-life details, factual as well as emotional, as this that make Full of Grace a little bit special.

On the music side, Vicente Ortiz Gimeno’s borderline syrupy score is rounded out by period fare such as George Michael’s ‘Faith’, which is appropriate, and ‘Woolly Bully’, which feels a bit odd.