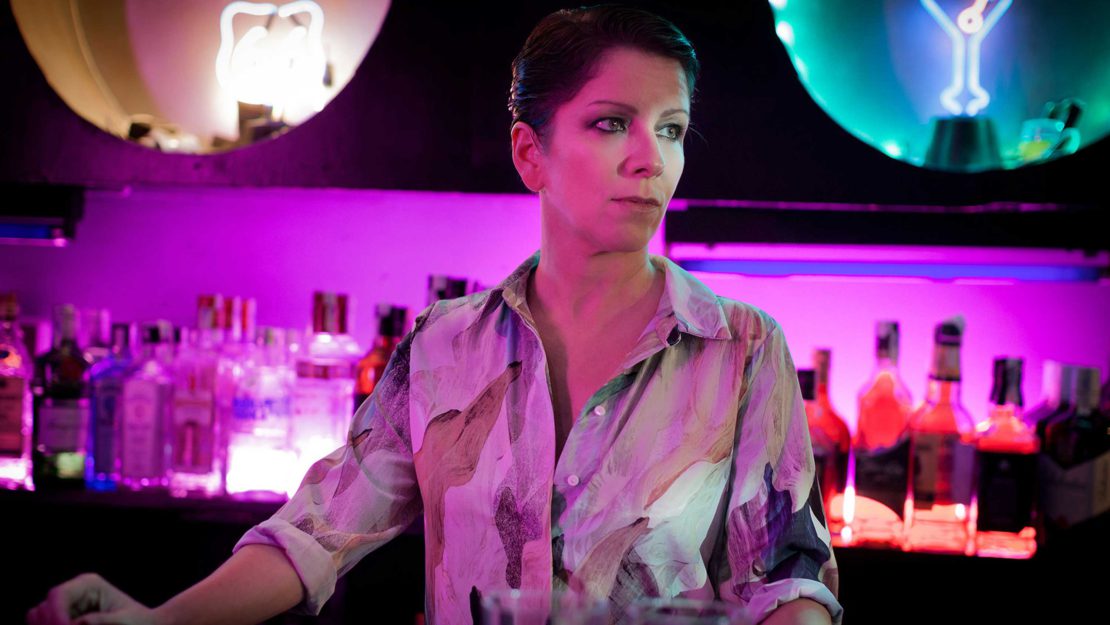 It’s odd, director Carlos Vermut must have thought, how many movies there are about stars, but how few there are about the fans who make them. Quien Te Cantara is his compelling attempt to rectify the situation. There may be a great deal of style and exquisite formal composition about this elegant and rewarding story, but it’s the terrifically moving central performance from Eva Llorach, playing a woman who’s given the exciting but dangerous opportunity to escape into the life of her favourite singer, that elevates Cantara into the category of something special.

Thoroughly contemporary in its explorations of fame, fandom, womanhood and shifting identities, this project, bigger in budget and scope than Vermut’s previous films, could, with the right handling, be the one to take his name out to a wider international audience.

Lila (Najwa Nimri), a pop star whose light is fading fast and who hasn’t sung in public for ten years, faints in the sea off the south of Spain and learns in hospital that she’s lost her memory. Shown a photo of herself by her longtime assistant Blanca (Carme Elias), she tells Blanca that she thinks the photo is of Lila Cassen, naming herself in the third person. It’s this intriguing misperception that this film about self-fashioning and identity will elegantly go on to explore.

Lila’s planned return to the stage — her public comeback is due in a couple of months — is thus in jeopardy. Enter Violeta, an altogether more interesting character, who inhabits a far grungier world than Lila’s rarified, remote and spacious cliff-top apartment where most of the action will unfold. Violeta, depressed and about to do something awful to herself, works in a karaoke bar, has a great voice — and is a huge fan of Lila’s. We first encounter her giving the brush-off to weaselly salesman Nicolas (Julian Villagran), in the film’s only male speaking role, in a scene that lasts a mere five minutes. (This is a highly stylized but appropriately depopulated film, one in which less is more.)

Violeta lives with her daughter-from-hell Marta (Natalia Molina), disturbed to the point of psychopathy, who’s given to threatening suicide at the slightest provocation: Molina does terrific work, making every scene in which she appears a white-knuckle experience for not only Violeta but for the viewer as well.

Having seen the passion and commitment with which Violeta transforms herself into Lila in the karaoke bar, Blanca asks her to help Lila rediscover herself — to train her, as it were, to become the old Lila again. A fascinating, shifting, complex and confused relationship will open up between the two women, fan and star, with Violeta suddenly having to relocate into an entirely different and psychologically dangerous world that also offers escape from the horrors of Marta. Who is Violeta, really? It’s a daringly ambitious conceit, made credible by the great skill of the script and the actors’ attention to the nuances of their roles. “Aren’t you afraid of being someone you’re not?” Violeta asks Lila, in what may be the film’s key question.

Visually, Cantara is careful and lovely, shadowy and dark in its tones, and filled with meticulously-composed shots: Vermut trained as an illustrator and knows how to make symbols out of pictures, how to create images that repay careful watching. The sea plays a major role, always in the background, as enticing and dangerous as stardom itself. When reflections of the waves are briefly seen rippling on Violeta’s shirt and skin, and waves later echoed in the carefully arranged satin sheets of Lila’s bed, it all adds up to something.

Indeed, everything about Cantara feels tremblingly assembled, and it never quite shakes off the air of something that, however lovingly, has been put together piece by piece. At times it feels like high-quality pastiche — though in a film about a person pretending to be someone else, this may not be a criticism. Everything slots tidily — sometimes perhaps too tidily — into the script’s structure, whether it’s the salesman’s symbolic talking dolls, or a beautiful shot of a marine picking out a delicate guitar tune (Vermut enjoys playing characters against stereotype), or the little origami boats that Blanca makes, or the fact that the Andalucian coastal town where the film is set is called Rota, which could (just about) translate from Spanish as “broken woman” (cast and crew presumably had to make the 500-mile journey down from Madrid in order to make the joke work).

An exquisite structure, the focus on broken women, the melodrama, the almost tactile intensity of color and light, the liberal use of performance and song, and a score by Spain’s highest-profile composer, Alberto Iglesias, best-known for his work with a certain other Spanish director: It’s pretty clear Vermut has boldly marched into territory that during the 1990s Pedro Almodovar made his own. Comparisons will be made, but they’ll be futile, because just as Violeta the fan remakes herself in the mould of Lila, so does Vermut’s film remake itself in the manner of one of his heroes. This could be the cleverest thing about this very clever film. (Though it could, of course, all be a cynical attempt to cash in on the sense that there may be room for more than one Almodovar in the international market.)

It was back in the 90s that the very particular, otherworldly looks and manner of Najwa Nimri were first used by the likes of Alejandro Amenabar and Julio Medem. (Like Lila, Nimri has been quiet of late, and Cantara represents her return to cinema.) Nimri’s Lila is almost inevitably a remote, ghostly presence, a cipher: her human story is contained in a single lengthy monologue that strikingly shows how she’s recovered her memory, but that comes too late on to give her much human depth.

Violeta is by contrast very human indeed, Llorach virtually single-handedly carrying the film’s emotional intensity and the weight of its complex psychological underpinnings through her exchanges with Lila. Llorach, who has appeared in both of Vermut’s previous films, is wonderful as a lonely, ground-down, repressed and traumatized woman with few illusions left, but who still retains the glimmer of hope that her old fangirl dreams are founded on something real. It’s a peach of a role, and Llorach, in an edgy, hyper-intense performance, is up to the job.

The title translates as “Who Will Sing to You,” a song by Mocedades, Spain’s 70s version of the Mamas and Papas. Inevitably music is a big part of the film, whether it’s stirring but cheesy 60s and 70s fare or the somewhat bland electropop (sample lyric: “I felt the wind on my face, I saw the wolves go by”) delivered by Lila herself, voiced by a combination of Nimri, Llorach and singer Eva Amaral. If Quien de Cantara is a few minutes too long, then it’s because it overindulges the music; as a final twist, it’s fully appropriate that it’s the sound of the sea, and not a song, that plays over the credits.