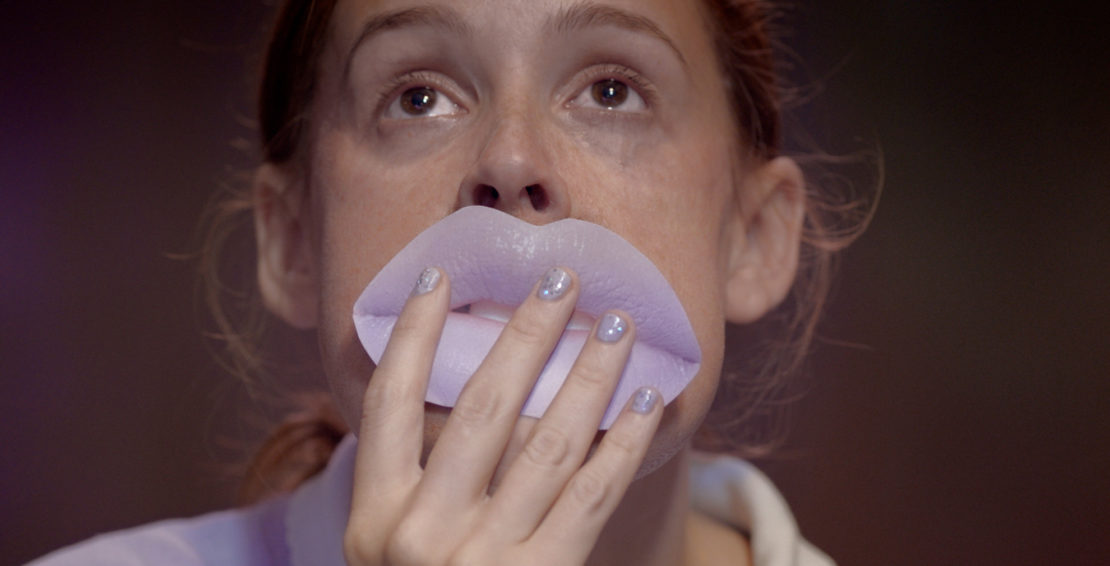 Movies have often reminded us that physical beauty and ugliness are only superficial, but Spaniard Eduardo Casanova’s debut Skins makes the point in a distinctive and entertaining way. Fusing the bright, kitsch colors of early Almodovar with John Waters’ transgressive love of the forbidden, this series of interlocking stories about folks with physical differences seeking their place in the world has the virtue — especially rare in Spanish cinema — of introducing the viewer to a new, off-kilter world. Though it lacks depth and is sometimes clunky, the film is persuasive and thought-provoking for as long as it lasts. On this evidence, TV actor Casanovas, just 25, has found a theme with powerful possibilities for future works with more nuance and shade.

Skins was produced by Alex de la Iglesia, whose The Bar also played at Berlin, and it utilizes lots of de la Iglesia’s favorite actors. It sets out its darkly bizarre store early on, as Simon (Antonio Duran) learns by phone that his wife has just given birth. He weeps with shame as an elderly naked woman shows him pictures of young girls with whom, it’s suggested, Simon wants to have sex. He eventually chooses one, whom we next meet later in life as Laura (Macarena Gomez), obviously beautiful apart from the fact that she has no eyes. She’s now a prostitute, her clients empowered by the fact that Laura can’t see them.

Even less fortunate in her appearance is Samantha (Ana Polvorosa, who worked previously with Casanova on his short, Eat My Shit, and it’s to be hoped will not be stereotyped by this particular role). The unfortunate Samantha has been born with an inverted digestive system — her anus and her mouth have been interchanged. Bravely she decides to step out from the wood cabin where she lives with her father and seek social acceptance, with soul-crushing results. In a cafe, she is cruelly laughed at by the overweight Itziar (Itziar Castro), later revealed to be one of Laura’s sexually insecure clients.

Other characters include Ana (Candela Pena), who has a large tumor on her face and is having an affair with burn victim Guille (Jon Kortajarena), though Ana is loved by Ernesto (Secun de la Rosa); self-harming Christian (Eloi Costa), who dreams of having no legs, so he can become a mermaid; and little person Vanesa (Ana Maria Ayala), who despises her job dressing up in costume as a popular kids’ TV figure. Meanwhile, Christian’s monster mother Claudia (Carmen Machi) is emotionally challenged rather than physically, aside perhaps from her shocking tracksuits.

This is a lot of characters, plotlines and ideas to handle, but Skins just about makes it hang together by setting it in a separate but coherent world from ours — one that’s surreal and highly stylized, full of garish pastel interiors with heavily predominant pinks, which must have felt like a gift to production designer Idoia Esteban.

Cleverly, the film’s point — which is to ask viewers to readjust their perceptions of what beauty means — thus extends into the visual aesthetic. That kitsch effect is both crude and effective, enhanced by over-the- top use of melodramatically corny ’60s and ’70s pop songs as a running commentary. (The cliched used of Bizet’s Carmen works less well.) What is sacrificed, under the riot of style and color, is depth.

Generally the script, supported by some authentically committed and physically challenging performances from a range of actors of varying experience and ability, ambitiously and sometimes exhilaratingly tries to imagine what life might actually be like for these unhappy people. There are several wonderfully ironic moments, which neatly turn the cliches of soap opera on their heads, as when the heavily disfigured Ana powerfully tells Ernesto that he only loves her for her appearance.

Given the sometimes distressing images on the screen, Skins is actually light of touch, though sometimes not as funny as it thinks it is — the gag-inducing gag that has Ana blowing out her birthday candles with a farting sound would have best been left to the viewer’s imagination. Skins saves its most transgressive shot for last. The penultimate image, which some will find upsetting and others hilarious, and which everything in the film has been building up to, raises all sorts of interesting questions about whether to frame in close-up or not. Ultimately, it could be a succinct expression of what happy endings are really about.