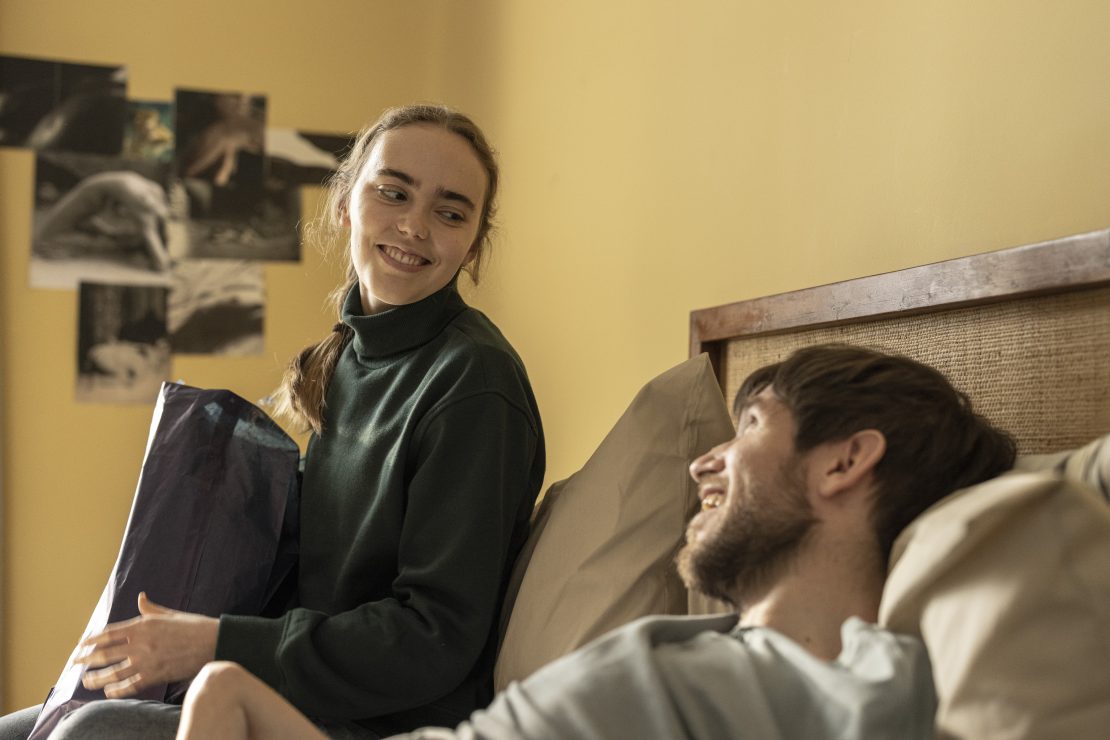 Following films about borderline personality disorder (Wounded) and dying (Morir), further evidence that Spanish auteur Fernando Franco enjoys negotiating ethically tricky terrain comes with The Rite of Spring. The challenging tale of the strange relationship between a repressed Christian woman and a boy with cerebral palsy deserves top marks for daring, is undoubtedly crafted with care and, despite its austerity, is Franco’s most accessible work to date.

That austerity – in line with his previous work – makes for an intellectually stimulating but somewhat chilly viewing experience. But of course some viewers prefer their artistry to be uncontaminated by emotion, making it likely that Spring, following its appearance in San Sebastian’s official section, will dance into the festival and art house circuits.

The setup unfolds as slowly and deliberately as the rest of this very careful film. Laura (Valeria Sorolla, making her debut) is a university student from out of town, alone and lost in Madrid and living at a residence for Catholic girls. After a rather too drawn-out setup following a party, she ends up accidentally wandering into the bedroom of David (Telmo Irureta), the host’s brother. Telmo has cerebral palsy, pictures of naked women all over his walls, and the kind of spontaneous, open smile that wins us over instantly. At his request, Laura scratches his neck for him, instantly planting the seed of a physical relationship, and goes on her way.

David has a blog, on which he discusses the question of sexual assistance for people like him. Initially intrigued, Laura, bit by bit and guided by David’s mother Isabel (Emma Suarez), takes on the role herself. These early scenes explore an area of experience with which many will be entirely unfamiliar, and the film’s strongest scenes, played out in an atmosphere of almost unbearable fear and trembling punctuated with moments of necessary comic relief, are those which chart what the experience is like for both of them. We should be set for a really interesting relationship.

Laura, it seems, is not merely being altruistic. As evidenced by a couple of failed flings she has with other guys and by the fact that we see her early on buying a vaginal dilator, she’s using the experience to work through sexual issues of her own. Matters inevitably become more complicated when the relationship threatens to become more than just transactional, with Laura’s clinical approach to the problem—she’s a chemist, after all— likely to raise eyebrows.

One problem with The Rite of Spring is that the script is far more interested in presenting interactions in exquisite detail than it is in putting flesh on the characters involved, giving things an airless, remote feel. This feels in direct conflict with the viewers’ wish to delve deeper into the complex situation than Franco has so laboriously set up, and with which he presumably wishes us to engage. Neither the viewer nor Laura ever learn much more about David than that he enjoys sex and old blues records, and that he’s very funny indeed: we have only access to Laura’s limited view of him.

And the issue is even more damaging with Laura herself, whose true motives ultimately remain an enigma. At what price working out your sexual issues? Who’s using whom, and should they be? There are points where the script should probably be asking Laura to explaining her motives to David, but it doesn’t do so, and the effect is to make her come over as not only repressed, but—if not vaguely sociopathic—then at least lacking in self-awareness. (There may be a critique of Laura’s Catholic education here, but The Rite of Spring doesn’t really seem the place for it.)

One feels that both the characters, and the brave actors playing them, deserve more: it’s almost as though, having set up this uncommon and intriguing situation, the script lacks the imaginative power to fully explore its human consequences, to engage the viewer too closely with the high emotional stakes. Michael Haneke, for example, knows that its possible to weld analysis to powerful emotion. But it’s easier, perhaps, just to show the characters doing what they do, to keep things as exquisite as the ironical, culturally charged title suggests they will be, and to let the audience make up their own minds about everything.

Slowly the story advances, as though continually concerned about giving offence: the pacing rarely varies and, like some of the dialogue, is rather plodding. But given all that, the visuals are beautifully composed, both the central performances are terrific and, along with some fascinating unanswered questions, that smile of David’s, the most open and unaffected thing about this too-restrained film, lingers in the mind long after it has ended.