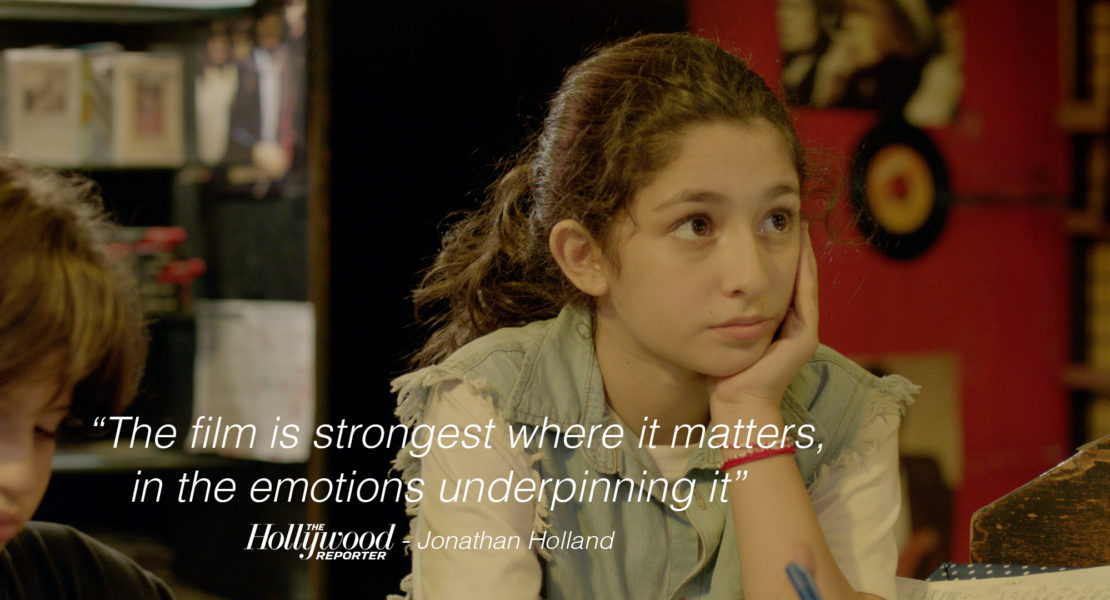 Ana García Blaya’s feel-good debut tells the story of a young girl growing up with a slacker father in ’90s Argentina.

A touching, wry and very likeable look at the relationship between a slacker Dad and his nine-year old daughter at a time when their family looks set to break apart, THE GOOD INTENTIONS feels like a hybrid of feature film and home movie. Giving off a low-budget, shaggy air that’s totally appropriate, the film is strongest where it matters, in the emotions underpinning it — and it’s the depths lying below its apparent slightness, along with its sheer bounce and freshness, that will likely draw the viewer in from the start. Intentions seems well-placed for further festival showings following its Toronto debut.

The opening scene features a young girl waking up on a mattress and getting up and going into the kitchen where she starts to wash the previous day’s dishes. This is Aman (Amanda Minujín), the daughter of Gustavo (Javier Drolas), a separated slacker Dad who runs a record store with his buddy Néstor (Sebastian Arzeno), and they have just slept on the shop floor.

It’s already clear that at nine, Aman is more responsible than her father, who shares custody of the kids with Ceci (Jazmin Stuart). Though his business (like many in 90s Argentina) isn’t bringing in enough money to pay for the education of Aman and her younger brother Manu (Ezequiel Fontenla) and sister Laia (Carmela Minujín), Gustavo, who’s a perfect fit for a Nick Hornby novel, still prefers to spend his time watching soccer and listening to music.

But Gustavo and the kids love each other. Despite his failings as a family manager, Gustavo is a great Dad, and scenes of them driving along, shouting out songs together, are sheer joy. But then Ceci, worried about the kids’ education, tells Gustavo that she’s planning on taking the children to Paraguay with her partner Guille (Juan Minjuin), where there’ll be more money.

Unhappy but incapable of doing anything to stop her, Gustavo goes along — until Aman tells her father that she wants to stay with him and will set about getting a scholarship to pay for her own education, considerably raising the film’s emotional stakes as she does so. Aman feels that Gustavo needs someone to look after him: As the film goes on, the emotions churning beneath the surface become increasingly complex.

THE GOOD INTENTIONS is apparently based on the experiences of the director (who it’s clear knows her music: She once played in a cult band called Sorry, who feature heavily here.) Fleeting, random and often joyous images of home movie footage are used extensively — perhaps indeed too extensively, so that they start to break up the flow of the main story, for which the viewer wonders whether a little extra time might not have been used.

Performances are terrific, particularly from Drolas and Arzeno, who effectively form a useless guys comedy double act. (One scene, recording in real time Aman’s attempts to awaken a hung-over Nestor from the sofa, makes for comically painful viewing.) Gustavo must have behaved pretty selfishly in the past, but no mention whatsoever is made of this, the script generously forgiving him his sins and allowing Drolas to come across as charmingly shambolic. (Indeed, any dads who are currently in the doghouse for similar reasons to Gustavo might consider taking their partners to see THE GOOD INTENTIONS.)

But the standout performance is from Amanda Minujín, who’s unsurprisingly from a family of actors — her father and sister both have roles here. In her face-offs with Gustavo, particularly through one lengthy stretch of dialogue later on, calling for copious amounts of light and shade, the young actress shows herself more than capable of handling the burdens of emotion that the script has put on her shoulders. Aman is both as thoughtful and loveable as the film itself.

Intentions features lots and lots of music — rarely is there a 90s Argentinian indie rock song not to be heard playing somewhere, and it’s important that it’s the soundtrack not only of the film, but also of the characters’ lives. That’s where Gustavo’s success as a father lies, the script seems to suggest — in the wonderful fact that his kids know the all words of the songs he grew up listening to years before they were born. It might not pay the rent, but surely that’s important too.

The film is dedicated to García Blaya’s parents, and feels like a heartfelt thank you to them both from the girl who might once have been Aman. So that more than with most movies, it’s worth sitting through the credits of THE GOOD INTENTIONS, during which, to oddly moving effect, the false footage of the film is replaced by real footage of the director’s own childhood.